The Cyprus Youth Clubs Organisation- KOKEN through its European partnerships gave the opportunity to 3 youth workers to participate at the Training Course «Shake your Emotions» that took place on 14- 21 March 2018 in Garaldea, in Spain.This project was organised by the Asociación Sociocultural Más Ocio.

«Shake Your Emotions» was a new, fresh and useful perspective on how to deal with emotions that might influence our behavior as youth workers.

The project analyzed the concept of emotion, through a process of deepening in this idea marked by group dynamics such as identifying others´ emotions, putting ourselves in others positions with took up role-play activities. The main idea was to start one introspective trip that would clarify our emotional situation; with this purpose, the formation following a line of analytic exercises like questioning our daily emotional behaviors will be developed.

The project focused on hate speech and different aspect of our emotional world. 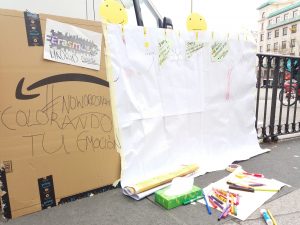 Here are some of the comments from the Cypriot team- Eirini, Stefanie and Melpo.

“My participation at the project “Shake your Emotions”  was my first in such an Erasmus+ program. The project was held in a village in Spain and concerned feelings and emotions. Although we did not have a lot of free time, we took some hours to explore the area and get to know the beautiful squares of the village, get out and have fun, something that brought us closer with the other participants.
During the training, we did have some very interesting individual and group activities, within and outside the field of education, focusing on emotions, sharing personal experiences and situations, writing, presenting, discussing, laughing and crying all together. Through this project, I have learned more about myself (about my feelings, how to manage them, and situations that I can endure or not) and about others (to understand, find solutions and help on other people’s problems).
In addition, I met people from different countries, I got to know their cultures better, I shattered some stereotypes that prevailed for their countries and I learned new words from completely unknown languages! We spent an unforgettable and constructive week all together; something that I came to realize after coming back in Cyprus. I believe that this participation will also be the reason for me to participate in more projects like this”.

“I was invited to take part on a project in Garaldea with the topic “Shake your emotions”. Initially, I was unaware of what to expect and so I had no fixed image of how the days would follow. It truly ended up being an “emotional shaker” for many of the participants involved. This project was a journey well spent which I thoroughly enjoyed being a part of. Most importantly for me, was my role as an observer as well as an active member in the developmental journey of my own as well as the other members of our group. Strangers coming together from across the board and various walks of life; with different goals, wants and needs from their experience altogether. Magically however, each one connecting with the others around them along the way.
This experience challenged me to see and have to handle a situation which I otherwise was not quite sure I was capable of or in fact a situation which I possibly would not know how to apply myself.  It brought me literally in touch with the needs of others, especially those who are less fortunate than I from a health perspective. Unless one experiences oneself out of comfort, one is unaware and incapable of recognizing ones limits and this point at which one is willing to compromise and further sacrifice ones own time to contribute to the happiness and needs of another.
I met some fantastic people. Each unique in there own special way. Many of which I hope to stay in touch with and will hopefully meet again at some point along the way as life slowly/rapidly unfolds.
Despite several challenges which arose, the organizers and the team leaders were more than capable and efficient in dealing with all these inconsistent bumps as they occurred.
I am very thankful to KOKEN that I had the opportunity to be a part of this project and remain hopeful that there will be more to follow”.

“I feel so grateful for the opportunity that has given to me, to participate in the training course “Shake your emotions” in Madrid. Although, my background is related with economics, I have chosen to join this project in order to gain new knowledge and practices about human behavior and share it with young people. After a day of travelling, me and the other participants from Cyprus, Greece, Latvia, Spain and Turkey arrived in a house close to a village in Madrid’s province. The house was located in the countryside. The project started with introducing of ourself to feel intimacy. The training courses included theory to inform us about the topic and discussions about it. Some of my favorite topics was emotion awareness, analyzing the definitions of “emotions vs feelings”, describing and drawing our fears that eventually came to be our strengths and achievements. During the training, everyone was allowed to express his/her opinion. I really like the fact of communication with people from different countries and culture and the expression of  of each one’s perception. On the third day, we moved in a hotel in Ocaña village. There, we did more activities individually and in groups and walking in the village during our breaks. On the last day, we visited Madrid and we made a public experiment by giving hugs to the passers and record reactions. My expectations are fully satisfied and I would like to thank KOKEN Cyprus and the organisers in Spain for this”. 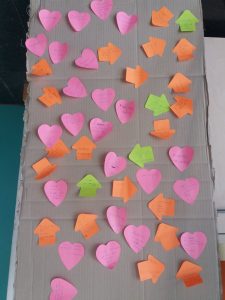 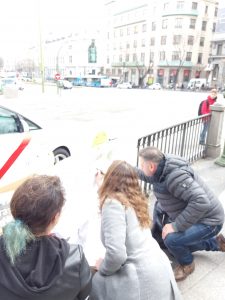 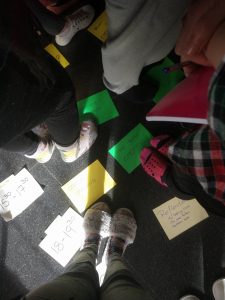